Given the ease with which images can be produced today, this trend tells about the persistence of sensory experience against the mere vision and can be considered as a symptomatic reaction to the spread of digital objects without weight, but also its necessary consequence. In spite of their difference, the works of Christian Heilig and Esther Horn fall into this trend and within it they reveal their identity. In both cases, the visual data generates an experience that could be defined by the term haptic, understood as a tactile apprehension of space and self-perception of the body in relation to its physical surroundings. The analysis of their work take us back to the past decade, when the spread of vector graphics caused the emergence of an aesthetic based on sharp edged shapes and the consequent rediscovery of all those human error, low-fi gesture drawings and dripping signs that eventually led to the unexpected rebirth of traditional drawing practice in contemporary art. The same combination of technology and handcraft – of abstraction and empathy, I would say – endows the work of the two artists with a peculiar expressive power, originated by drawing and its key role in the actualization of the images in space. 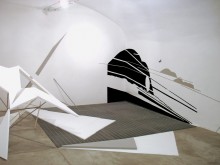 Christian Heilig turns lines and shapes into plastic elements by using them just like they were vector paths that can be enlarged and reduced without losing their own characteristics and easily become real and tangible in a wide range of materials. Triggered by the passage that turns virtual objects into actual reality, path lines invade the space in form of spruce beams, vector shapes are cut from MDF, polystyrene or plasterboard, mesh of three-dimensional graphics become sculpture and architecture. The result is a materialization of mental landscapes interacting with the venue in a spontaneous germination of forms that let the viewer experience new environments.

Esther Horn uses to create imaginary landscapes too. As a painter, she turns on bright color field on her dark canvases, which provide lit stages for the embodiment of her nocturnal visions. Even though many of her paintings seem to reproduce frames from mysterious road movies, the relationship of her work with cinema goes beyond the choice of the subject matter. Indeed, the movie theater itself is the place where the screen faces the dark space of the audience, making the contrast between optical and haptic experience clearly visible. Some of Esther Horn’s first paintings, depicting landscapes inlayed in the inner part of a camping tent, show a metaphor of the combination of screen and place of vision, image and space that has been developed into wall drawings and installation throug the cooperation with Christian Heilig.

Mean Shadow of a God, the project designed by artists specifically for the DAC (see here), is just an emblematic demo 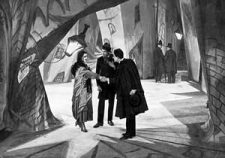 nstration of the expressive potential of moving from immaterial imagery to reality and of the clash of optical and haptic space. Light is expressive once again the means of a phantasmagoria of shapes, distorted and broken by the projection on the venue walls. The dramatic force of such actualized images suggests the sharp shapes painted by Walter Reimann and Walter Röhrig on the set of the famous expressionist film Das Kabinett des Doktor Caligari (R. Wiene, 1920) while depicting light and shadows directly on the props.

If it now made sense to talk about the phenomenology of styles as at that time did, the work of Christian Heilig and Esther Horn would be an exemplary witness of our time in a hypothetical survey of expressive forms.