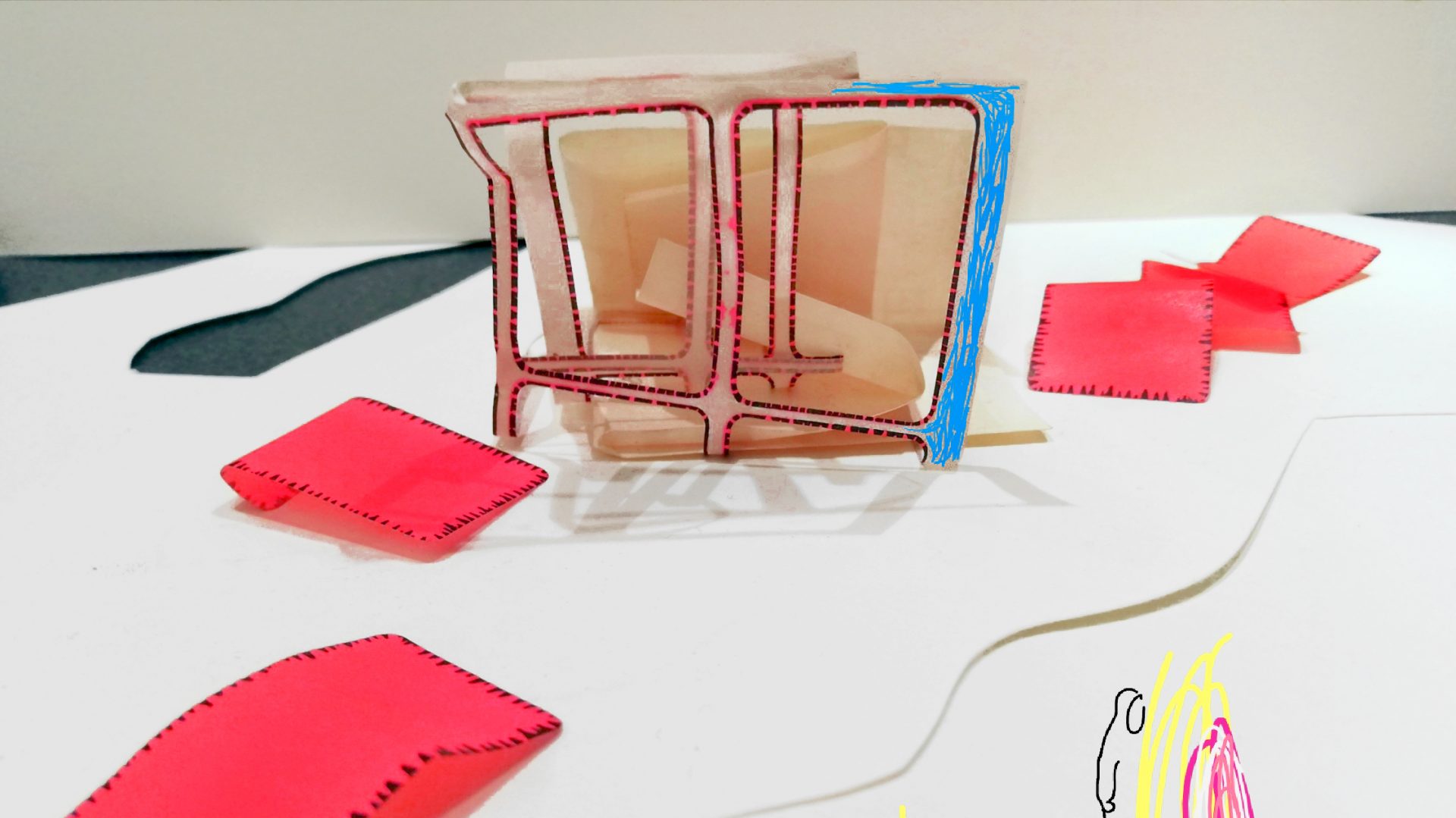 A VIEW OF THE SELF: WINDOW AND PICTURE SPACE. A DISCOVERY IN PABLO PICASSO’S EARLY WORK

Since I speak to you as an artist and not as a scientist, I would like to introduce the focal points of my discovery with a more eventful description before I introduce you to the central topics.

In spring 2011 I traveled to Barcelona and visited the Picasso Museum during my stay and for no specific reason. I remember that some rooms made a cavernous impression on me due to the presentation at that time in darkened wall colors and spot-like lighting, which concentrated my perception.
The narrow, busy streets of the „Barrio Gotico“ – the old town surrounding the museum – were just as far away as the blazing sun and the nearby sea.
Just amongst the shoving hustle of the well-attended halls there were enough reasons for numerous inspiring observations, they opened my mind in many ways, there was a steadily growing communication with content on different levels.

One picture, however, called for my special attention, a small still-life. It is called Interior, in some publications it is also called window.
It is 50 cm high and about 32 cm wide. Although clearly recognizable as an interior, the picture does not contain any spatial identifier such as angles or edges. In the middle of the room we see a square window, which occupies a prominent area and ends with the upper edge of the picture. A cloth can be seen under the window, to the right of the cloth is a black umbrella leaning against the wall. There is a light-toned surface under the cloth.

The window is divided into nine segments, of which the top three are painted as opaque, blind areas, in which no external representation takes place. Its medium toned exposure value represents a connection to the dark interior. The six lower fields remain in landscape format and include the actual light and exterior display.

Here my eyes paused intensely. I noticed a peculiarity that contradicted the otherwise reduced design: Picasso had painted dark corners in the corners of the light window. I realized that with economical means, the window was simultaneously created as an image of an inverted canvas. The corners are irrelevant for the display of the window and represent protection- or tensioning wedges of a canvas cross.

At this point I saw: the window is a painting!

The canvas and the window are arranged to represent each other in a flip-flop way and mutually claim interpretational sovereignty: looked at more closely the window – and the whole picture – opens up a mysterious double existence.

After my return, this exciting discovery was the start of an intensive study of the image, which soon led to further discoveries. I came across the link between window / picture / frame – and in later phases in Picasso’s work – also mirrors. I sighted all series of the early work window pictures , which emerged in the years 1899 to 1900, as well as pictures and drawings from 1894 to 1903.

One can summonize that the window pictures of the early work on the one hand deal with the motif complex of the „bedridden“ which are related to Picasso’s early success picture science and charity from 1897. I will come back to this series of motifs later.

And on the other hand there is this series of paintings and drawings dealing with the meaning of painting and depiction in a self-referential reflection. In addition to the core discovery described at the beginning, this series also includes the two more paintings: Window with curtain from the interior and closed balcony, both from 1899.

All together the three pictures play a key role in Picasso’s early window theme. This is where the cubist theme really begins: in its refusal of a back then current conception of imagery which derived from a renaissance understanding of painting.

The author of this image concept, the architect, art theorist and writer Leon Battista Alberti, developed and summarized a new approach to perspective and perception in 1435/36 in his famous tractate De Pictura.

His focus was on the image function of the painting and the rules according to which the three-dimensional subject is transferred to the two-dimensional image surface in a quasi-scientific manner.

Alberti recommends an initial strategy for the painting act, he writes: „For the time being, I describe a rectangular square of any size on the picture surface, which I imagine as an open window, so that I can see what is to be painted here“.

This resulting topos of the picture-window correlation was still relevant for creating pictures in the 19th century, even if it also underwent a transformation. A different understanding of reality had established for the realists and impressionists: the focus was no longer the mimetic content of a representation relating to three-dimensional quality, but on a new pictorial quality of everyday subjects, as well as lighting moods and the associated appearance of things. Here the picture had become a reality that was also perceived as an ephemeral.

Against this here broadly outlined art-historical-academic background, Picasso developed these three pictures. He explicitly addresses the window subject in these paintings. But neither does it refer to the impressionists‘ color-light mood, nor are the images views of a reality outside of the image space.

The window is evoked, but only in order to deprive it of its function as an extension of the room or as a “view”. Picasso „closes“ the window or denies its existence. He also closes the image space and removes the image from the task of being a projection surface for spatial illusion.

With this radical rejection, he makes the window itself a picture reality. In Alberti’s metaphor, the picture opens up access to itself: the window becomes window to the window.

The view of an exterior and a view of the interior – both remain closed in these pictures. Nothing helps the viewer find orientation and, for example, localize location specifics or proportions. A “view” at every level is prevented.

Additionaly in Window with curtain from the interior the withdrawnness and brittleness of the motif is toughened (again) by a cloth. It covers most of the window here and only releases daylight in the upper third. Shapes of an opposite wall of the house can be seen abbreviated, the shape of which is lost in shadow spots on the cloth, together with the dimly recognizable window cross. Light and shadow are largely subdued and as if enveloped in the formlessness of the veiled cloth and are given a strange, almost three-dimensional shape. Ironically the brightest area of the painting in the upper third of the picture is an exterior wall of the house in front of the window. The strongest light coincides with the enigmatic increase the upper part of the picture and, as a perspective of light, becomes the actual spatial element of the picture.

So this supposed view, this „window-painting-image“ without a view, pushes itself into the field of vision like a flat hand, which is stretched out and prevents access to the depth of the room. Space exploration and the associated self-location is not possible. The viewer is thrown back on himself even more rigorously than when looking from an interior onto a snowy landscape and has to ask himself what he actually sees: the picture is a picture of a window that is not a window and therefore the picture is not a window. With this small painting, Picasso releases the image from the meaning of a window in the Albertian sense.

The reality that is “available” here is the image itself as a “fertile moment”. However not does, as it is known from ancient sculpture, the discus thrower reaches back in order to find his movement completed in the extreme point of the new beginning motion.

Picasso quasi reaches back with the window theme as a subject to start a new way of seeing. The picture does not tell, does not illustrate anything. It places the viewer in the state of his own presence as a perceiver: as a seeing person, he has to start anew with the picture, orientate himself and include and question the conditions that provide orientation.
He has to maintain a dialogue about what he sees and its requirements. The picture makes itself available as subject and as the communication process likewise.

A further paradox arises from this: not only does hermeticism reveal mental space, but also greater closeness to the viewer. When asked to become aware of his own perception requirements, the viewer performs the question with the image to a certain extent. It is not a foreign reality that is opened to him in the window, but the viewer’s own, present one coincides with that of the picture.

Picasso brings the viewer into his own intellectual presence: „The picture as a window“ according to Alberti obviously no longer applies to his understanding of reality, he sets it down, dethrones it like a king whose time has come.

A few years later he found in Paul Cezanne’s paintings, but also in the increasingly popular rediscovery of Asian representations, a visual reality, perspective and formal language that led him to a completely new understanding of space and images: the cubism.

In doing so, he does more and more with what he starts with in this small picture from 1899: the abolition of the Renaissance perspective as a “keyhole principle”, which painters and viewers establish on a common fixed standpoint and image focus. It is no longer a perspective in something that is seen together, but a common ground in the question of what is represented that is increasingly becoming the basis of the visual act.

He frees the image from the rather passive status as a „narrative projection surface“ and initiates an emancipation for the image as a „counterpart“ with a quasi autonomy status and life of its own.

A counterpart with whom you can start a dialogue at any time and which bring its own genesis of origin into this dialogue. A good picture is a picture with which you can communicate indefinitely. The visual, aesthetic and intellectual complexity with which a picture faces the viewer still defines its autonomy status.